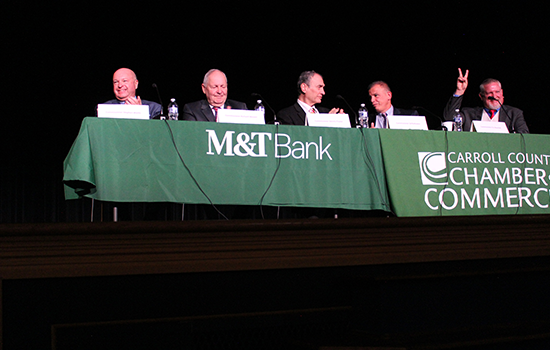 The commissioners from each of the 5 districts addressed the audience to highlight important successes from the past year and ongoing initiatives moving forward.

Commissioner Steve Wantz, District 1, started by stating the board made great strides to grow in an efficient, balanced and professional manner to ensure Carroll County maintains the highest levels in all aspects of local government. The commissioner continued his emphasis on the three E’s:  Economics, Education and Emergency Services. He touched on the three core areas and provided examples identifying important and positive momentum in each. Many details highlighted examples of recent enhancements in the emergency services arena. He also mentioned the upcoming 2020 Census and its importance for future local funding. Commissioner Wantz’s service on the Maryland Association of Counties Board of Directors and Legislative Committee, Shock Trauma Board, Governors Emergency Management Council, and Federal Emergency Management Regional Council as well as being Vice-Chair of the Baltimore Metropolitan Council called attention to the importance of Carroll’s regional involvement and leadership. He concluded saying the board has constructed a solid foundation with the building blocks of fiscal responsibility, accountability, collaboration, and transparency; a foundation that will stand the test of time and a quote from Abraham Lincoln, “I have simply tried to do what seemed best each day, as each day came.”

Commissioner Richard Weaver, District 2, began by noting positive progress and achievement can be slow; however, he is proud of the growth achieved in Carroll County.  The commissioner recognized and praised law enforcement, the public school system including teachers, employees and the Board of Education, the 14 independent fire departments in the county and Carroll County Government employees.  After stating the board’s goal to maintain a healthy balance between industry, commercial enterprise, housing, and agriculture, Commissioner Weaver then focused his speech on agriculture.  He praised the agricultural preservation initiative and then revealed some mega trends key to an agricultural revolution and the burgeoning technological agricultural industry. Some topics included gene editing, trait expression, precision robotics, and biologicals.  The speech concluded with the importance of agriculture and agricultural education to the future of the county and how Carroll County continues to be the leader in Maryland by working to train the next generation of agricultural scientists.

Commissioner Dennis Frazier, District 3, highlighted three primary themes during his speech:  an update on airport safety enhancement, transportation upgrades and praise for the county’s recycling program. He explained the benefits of the ongoing airport runway expansion and its emphasis on improving safety for the facility. Regarding transportation, the commissioner discussed the Carroll County 5-year Transportation Plan and the county’s new electronic vehicle (EV) charging stations with plans for three more in the near future. He also gave examples of ways to improve the county transportation Trailblazer system with upgrades including increasing routes, expanding hours to accommodate the workforce and a smart-phone app to make the system more user-friendly. The speech also praised the recycling program and the recent significant decrease in the contaminate recycling rate, from 25% down to 10.5%. Commissioner Frazier closed with comments about attending a recent Climate Leadership Conference.

Commissioner Ed Rothstein, District 5, began by emphasizing his commitment to listen to citizens, learn from them and lead with them and, after spending over a year doing that, his opinion is the state of Carroll County is strong.  His focus is and will continue to be on community values and maintaining an excellent quality of life in Carroll County and prioritizing resources on actions supporting those values. His speech identified development initiatives involving main streets, transportation and highway, community planning, comprehensive rezoning, and small business development and stressed the importance of maintaining the positive momentum in these areas. He highlighted economic development successes of the last year and three major land development projects which could bring over 1.5 million square feet of marketable business inventory on-line. In addition, the commissioner praised the county’s Veterans Services Program, recently awarded as a leading state role model at December’s recent Maryland Association of Counties (MACo) Winter Conference. Commissioner Rothstein encouraged continued community engagement and asked community members to stay involved and communicate with the board to work together to preserve the county’s excellent quality of life.

Commissioner Eric Bouchat, District 4, started by recognizing county staff and local leaders for welcoming him to tour departments, schools, and facilities in order to better understand operations within the county. He stated tours and speaking with representatives opened doors of knowledge, understanding and potential solutions. Many of his talking points reviewed and praised educational highlights including Carroll County Board of Education, Carroll County Public School System, School Resource Officer (SRO) program through the Sheriff’s Office, Career and Technology Center and Carroll County Public Library. He also mentioned the Department Recreation and Parks and its proactive approach to listening to the community, analyzing changing demographics and developing resources to meet the needs of the future.

The event is available for viewing on the county meeting portal, YouTube channel, and the county Facebook page. In addition, the State of the County event will replay on Comcast Channel 24.